Buenos Aires is one of the top LGBTIQ tourist destinations in Latin America. In this destination there are many artistic, cultural and social proposals to take advantage of a great stay. One of them is the LGBTIQ Pride March which is held every year and it is a demonstration seeking the rights of gay, lesbian, bisexual and transgender equality. It is the most important public act of community gay in Argentina. 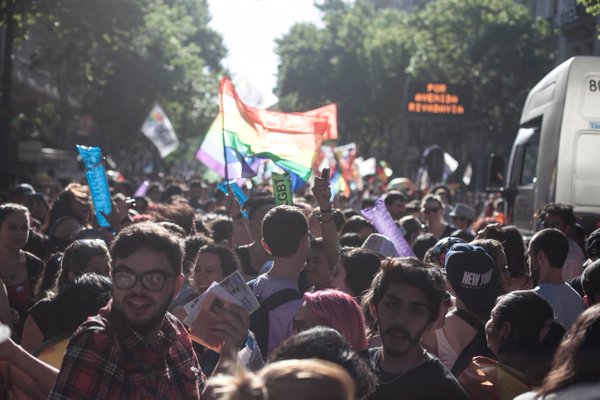 This celebration occurs on the first Saturday of November since 1992, in homage to the creation of the first homosexual movement of “Our world” in Argentina. This year, however, it will be on Saturday, November 26.

One of the goals of the LGBTIQ Pride March is to make claims, conquests, and pride by sexual orientation, identity, and gender expression. The main conquests of the community LGBTIQ in Argentina have been marriage between people of the same sex, the implementation of the gender identity Act and the repeal of the Contravencionales code, which criminalized to transvestites and homosexuals. This year the slogan is “law anti-discrimination!”.

At the first LGBTIQ Pride March in 1992 were just 250 people. After more than two decades it has always been increasing. In the last march there were more than 200,000 people.

From 1 pm people will meet in Plaza de Mayo, in front of the Casa Rosada, for the pride fair, where there will be a scenario where the speeches will be read and the invited bands will play: DJ Anna Logue, Duo Bravas, Orquesta Inestables and Tía Marilú. From 16 pm will start the Caravan that runs along the Avenida de Mayo from Plaza de Mayo to the Congress of the Nation. There will be a moment of kisses between all and more recitals (DJ Jara + Kevin Royk, Chocolate Remix, Rocío Rocha and Bandana) to finish singing “Soy lo que soy”, the anthem of the community.